The Julia Child Foundation for Gastronomy and the Culinary Arts

Julia Child made cooking fun. She inspired millions to take to the kitchen and appreciate the pleasures of making and eating good food. In 1995, Julia had the foresight to establish The Julia Child Foundation for Gastronomy and the Culinary Arts to further her far-reaching impact as a teacher and mentor after her death. Since 2004, the Foundation, through grants made to other non-profit organizations and by presenting the Julia Child Award, continues Julia’s legacy, educating and encouraging others to live well through the joys of cooking, eating and drinking well.

Listen to Our Podcast

Sarah Lancashire stars in the scripted series inspired by Julia’s life and her long-running TV show, The French Chef, now streaming on HBO Max and returning for a second season in 2023.

Julia ChildMonday, October 3rd, 2022 at 10:09pm
When conducting research in the mid-1990s for her first cookbook, The Wisdom of the Chinese Kitchen, Grace Young observed how her parents’ favorite cooking pan was not in fact a wok, but a Farberware stainless-steel skillet. When she asked why they weren’t using a wok, they explained that after moving to a new home in the 1960s, it was difficult to get their round-bottomed wok sufficiently hot on the flat coils of their new electric stove. For them, the skillet was a way to keep cooking familiar Chinese dishes, although the pan couldn’t replicate the nuance of “wok hay,” the prized taste that comes from wok cooking. The family wok was set aside for decades.

Years later, Young discovered her parents’ original round-bottom wok. It became an important symbol of her family’s migration story and a touchstone in her own writings and teachings about Chinese cuisine and culture in America.

Join Young, the 2022 Julia Child Award recipient, on Friday, October 14 at noon for a cooking demonstrate and conversation about Chinese culture in America, the importance of wok cooking, and her work to conserve Chinatowns across the U.S.

Cooking Up History is made possible by Dr. Stephanie Bennett-Smith, with additional support from Wegmans.

Julia ChildWednesday, September 21st, 2022 at 1:31pm
After two years of virtual presentations, the Smithsonian Food History Gala and the presentation of the Julia Child Award will once again be presented in person at the Smithsonian’s National Museum of American History in Washington, D.C. Thursday, October 13. This year’s recipient is Grace Young, an award-winning cookbook author, culinary historian, filmmaker and activist. To learn more about Young and to purchase tickets, visit the Museum’s website. Due to health precautions, seating will be limited, so tickets are going fast! #SmithsonianFood (Photo: Jutharat Pinyodoonyachet) National Museum of American History
https://americanhistory.si.edu/events/food-history-weekend/gala

Julia ChildMonday, September 19th, 2022 at 2:16pm
As the world mourns the loss of Queen Elizabeth II, the Foundation would like to share a remembrance of Julia’s brief encounter with HRH.

In 1976, Julia participated in a public television telecast of a White House State Dinner for Queen Elizabeth II, as part of the bicentennial celebrations. Julia’s role was to present White House Executive Chef Henry Haller preparing the meal for the Queen, along with 224 guests, including the Queen’s husband, Prince Philip, Cary Grant, Ella Fitzgerald, Barbara Walters, Dorothy Hamill, and Willie Mays. As Alex Prud’homme writes in The French Chef in America, Julia and her producer Ruth Lockwood felt grateful to take part in the event: “Ruthie Lockwood and I just felt that we were two lucky girls to join in a dinner for the Queen of England at the White House.” (Photo: Schlesinger Library, used with permission)

JuliaChildFoundation · Friday, September 30th, 2022 at 11:39am
@JuliaChildJCF
Did you know that Julia was the first woman to be inducted into the Culinary Institute of America’s Hall of Fame? Read more on the Foundation’s Instagram: https://t.co/Mrg0p1X4hP
(Photo courtesy @CIACulinary) https://t.co/Iqabaigev8
View on Twitter 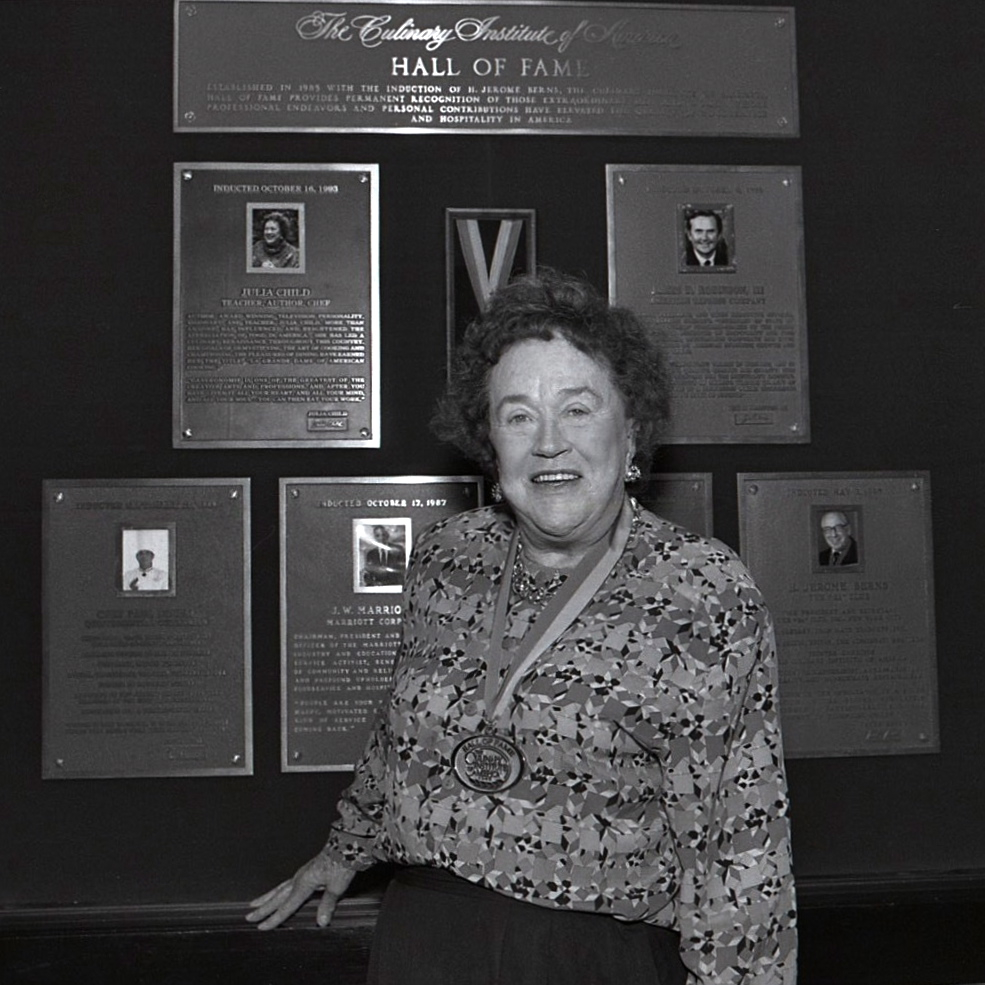 JuliaChildFoundation · Tuesday, September 27th, 2022 at 11:41am
@JuliaChildJCF
Is 'growth' really a good thing for food rescue organizations like @CityHarvest? We’re asking chef and vice chairman of the board @ericripert on this week’s Inside Julia’s Kitchen @Heritage_Radio
https://t.co/oRsXEIKCAf
View on Twitter
0
3 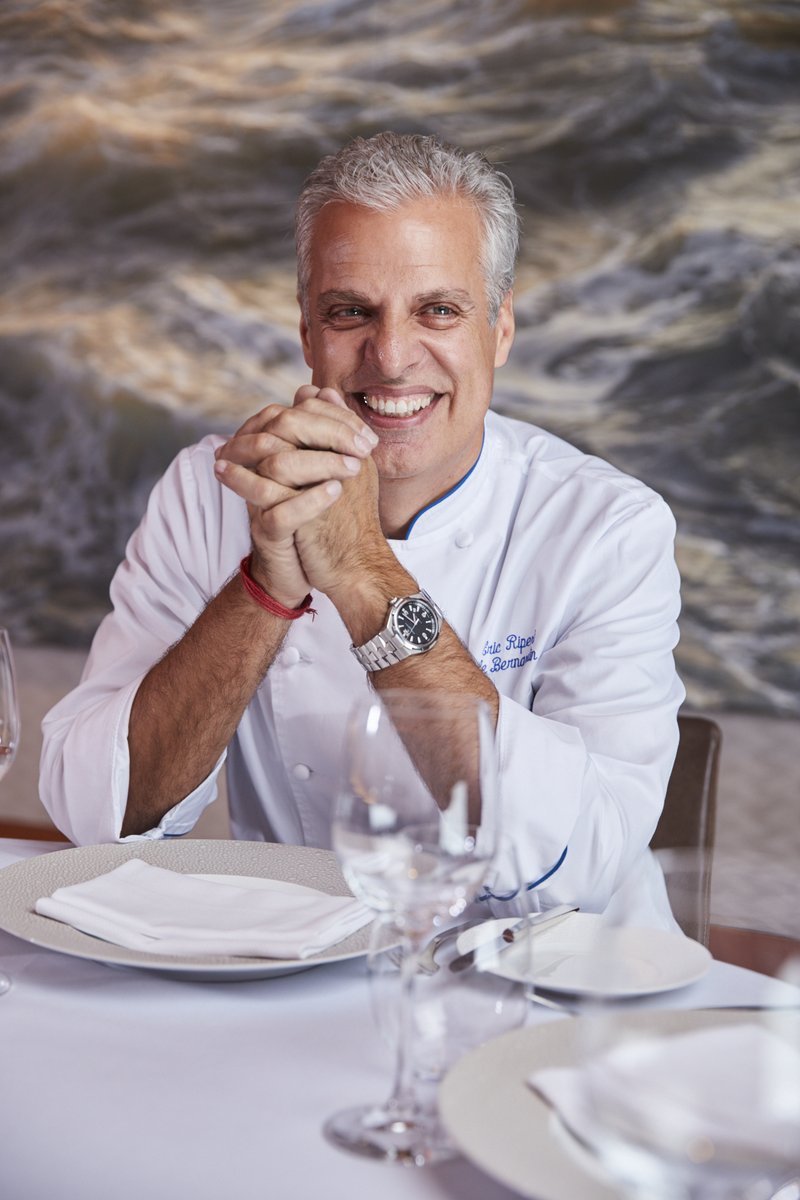 From her christening photo to leaning out the window of her Paris kitchen in 1949 on the cusp of classes at Le Cordon Bleu – with Ceylon and her wedding in between – here’s an intimate look at young Julia before she launched her meaningful career. The Foundation is grateful to Julia’s family for sharing these special images.